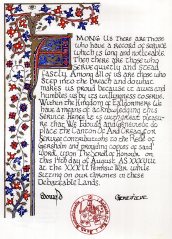 Ard Chreag was placed on the Scroll of Honour by King Edouard and Queen Genevieve for assisting Master Hector of the Black Height put together print copies of his poetic work The Rede of Gersholm.

The Order of the Bear’s Heart is given to gentles for their extraordinary dedication and service to Septentria. The kind of service is not prescribed, merely that the service be long-standing and of significant import to the Barony…When Cantons and Households receive a Bears Heart, they are normally presented with a banner to display rather than a pewter tokens. [Source: Septentria website]

Ard Chreag was inducted into this order for our ‘Scrolls for Skraels‘ initiative.

Award of the Broken Arrow

In the mid-2000’s Ard Chreag would award a broken arrow at the canton twelfth night to whomever had experienced the most embarrassing moment in the year recently concluded. Contenders for the award had to nominate themselves.

If your photograph is on this page and you wish it removed, or if you have any comments, please contact the Clerk Register. If you want your picture removed from any of our social media presences, please contact our Social Media Deputy.